The human immune system has evolved two distinct weapons to fight infection: antibodies and cell mediated immunity. Their combination would be an ideal weapon against cancer. But how to create this in a co-ordinated way? The advent of genetic engineering has enabled the fusion of these technologies and, thus, the ability to create Chimeric Antigen Receptors, or CARs.

CARs are engineered molecules that combine the antigen (e.g. cancer antigen) recognizing component of antibodies with cell activation signals. When the CARs are present at the surface of immune killer cells they enable these cells to not only recognise the cancer cells, but also kick-start the process of killing them.

Figure 1. Basic design of a Chimeric Antigen Receptor. The scFv provides specificity for a nominal (cancer) antigen. The cytoplasmic endodomains provide activation signals for the cell.  Second generation CAR’s (the most common) have two such signalling domains.

Cartherics is coupling CAR technology with techniques for editing out of strategic genes which normally act as hand brakes on immune responses. In healthy people these responses prevent immune overreactions, but when fighting cancer silencing them can enhance tumour cell killing. This multi-platform approach from Cartherics combines the best components of immune defences.

There are two types of killer cells which are commonly engineered to utilise CARs to target cancer: Natural Killer (NK) cells and T cells.

Figure 2. The major activating, co-activating and inhibitory receptors expressed on the surface of NK cells.

Cartherics believes its novel CAR-T and CAR-NK cells have great potential for killing solid tumours like ovarian, gastric, prostate and breast cancer.  The company is developing products for both solid and blood cancers.

CAR-killer cell products are of two basic types: autologous and allogeneic. The autologous therapies are generated from the patient’s own cells, while allogeneic or ‘off-the-shelf’ therapies use donor cells. There are pros and cons to each approach:

Cartherics is exploring autologous CAR-T cell clinical trials in two diseases: Cutaneous T Cell Lymphoma (CTCL) and relapsed ovarian cancer. The company plans to undertake both trials under a development partnership with the Centre of Excellence in Cellular Immunotherapies at the Peter MacCallum Cancer Centre.

Cartherics is utilising a novel approach to develop ‘off-the-shelf’ CAR-NK and CAR-T cells. 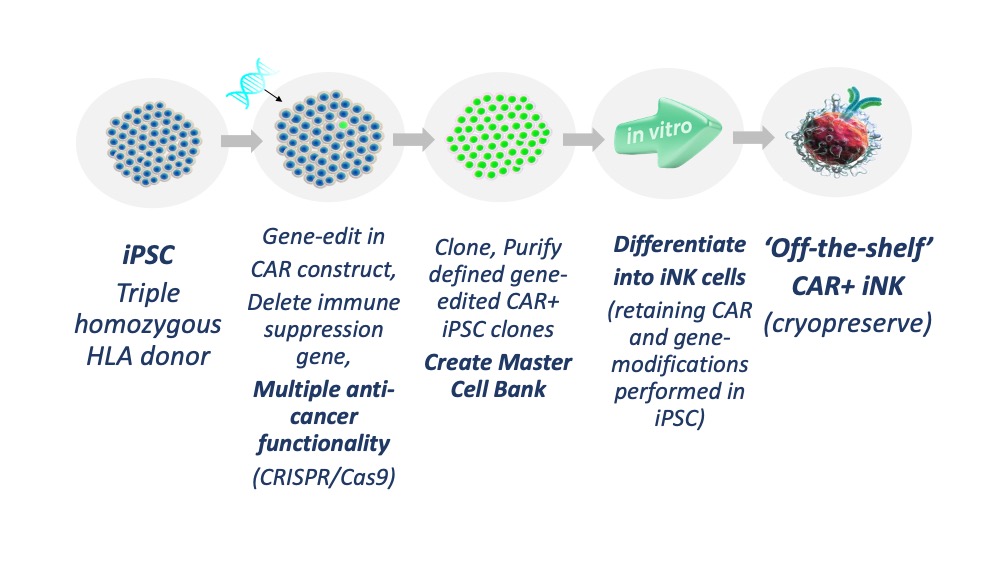 To advance the effectiveness of its CAR-iNK cells and CAR-iT cells, Cartherics is deleting key genes which act as hand brakes on immune cancer killing responses. Cartherics’ allogeneic platform will allow for:

Alan Trounson is ranked among the world’s most prominent scientists