The answer to self-discovery is found at Cartherics

The answer to self-discovery is found at Cartherics

For new recruit Walid Azar, it was about finding his calling.

As Walid Azar settles into his new dual role as Senior Research Fellow and Deputy Lab Manager at Cartherics, he feels content that he has finally found his calling. With previous experience in both cancer research and industry, he acknowledges having lived in the best of both worlds. Still, there was something missing.

Growing up as his family fled Afghanistan via India in search of safety and a future, Walid’s academic father and science teacher mother instilled in their three sons the importance of an education.

“We were raised to be good people and taught to make something of ourselves. But when you’re surrounded by war and poverty, your choices are limited. Pursuing your dream or passion is not an option.”

Walid’s goal throughout his school years was to emulate his high-achieving brothers. One went on to become a chief radiation therapist, the other a chemical engineer.

He followed his eldest brother into Biomedical Science at the University of Melbourne, then completed Honours and received his PhD in molecular biology and biochemistry at the Murdoch Children’s Research Institute. When it came to his future direction, Walid chose to head down the cancer research path, having lost his father to cancer just two years after they immigrated to Australia when Walid was 12 years old.

Shortly after submitting his PhD thesis, Walid secured a position as a postdoctoral research fellow at the Peter MacCallum Cancer Centre in Professor David Bowtell’s group. Walid credits Professor Bowtell for teaching him the definition of ‘good science’ and what it means to be a genuine person and a mentor.

During that time at Peter Mac – working on clear cell carcinoma, a rare subtype of ovarian cancer – Walid cultivated his interest in the cancer field. He also thrived being among scientists who were critical yet humble in their efforts to be at the ‘frontier of science’.

“The moment I stepped into that environment I felt like I was constantly learning something new, my knowledge expanding day by day, like there was no end to how much I could learn. It was exhilarating,” he recalls.

But as Walid started his own family and took on familial responsibilities, the lessons his parents taught him bore greater meaning.

“Back then, I was preoccupied with job stability,” he says. “A possibility arose that the lab had to move overseas but having a wife and young family meant it wasn’t just me I could think about.”

This prompted Walid to apply for a research scientist position with biotech giant CSL at their R&D site in Melbourne. His journey into industry research began.

At CSL, Walid was eager to get involved in every aspect he could. Formally, he was a research scientist/molecular biologist and CSL research project scientific coordinator, in charge of leading a scientific concept from research to product development.

He learnt the ins and outs of the biotech industry:  business structure, intellectual property and its patient-oriented focus. Walid also helped design and establish in-house laboratories, liaised with industry representatives for instruments and consumables, supervised and mentored university students, and even visited high schools in CSL-run outreach science programs.

At CSL Walid learned how to be a skilled problem solver, a multidisciplinary multitasker, a social committee member and even a fundraising event organiser.

“I’ve been very fortunate, to say the least. CSL was an invaluable experience, and I’ve added to my career repertoire things that I would have never considered before.”

But during this process of professional development, Walid uncovered two things. First, that his true passion was in cancer research. And second, despite a promising career at CSL it is okay to pursue your interest and passion.

Walid regards his new position at Cartherics as a “rare opportunity” to combine his expertise in industry and in cancer research, and to do so in Australia in a field he loves. It was an opportunity that he could not refuse.

“I’m excited about what I can be part of with Cartherics. I have a lot to offer, a lot to learn, and I look forward to achieving great things with this team,” he says. “I already feel at home.”

At Cartherics, Walid will be primarily involved in the in vivo studies and the autologous CAR-T cell streams. He will work directly with Chief Scientific Officer, Richard Boyd, and collaborate daily with Senior Laboratory Manager, Nhu-Y Nguyen, who he will assist in the operational management of the research group.

His final thoughts: “Your profession should not be motivated by monetary incentives or the prestige. It’s about your passions and dreams, getting up and going to work feeling like you have purpose and are contributing to society. Compared to what we experienced growing up, it’s only now that I am fortunate enough to be able to appreciate this perspective.” 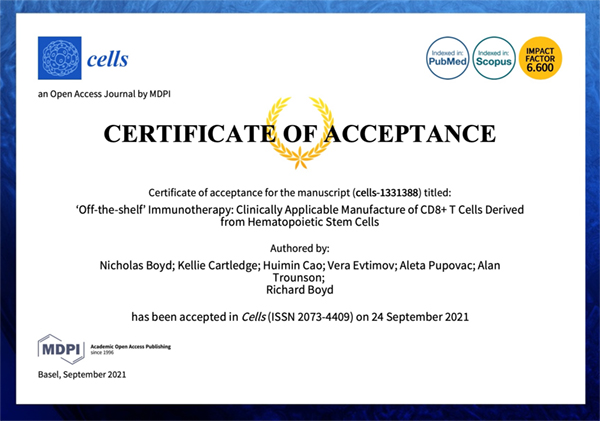