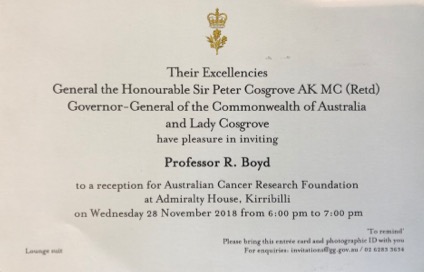 It was a dark and stormy night.  OK, that’s a slight exaggeration, but it was the day Richard Boyd was flying from Melbourne to Sydney to meet Governor-General Peter Cosgrove at a reception for the Australian Cancer Research Foundation (ACRF)[1]. It was also the day that Sydney had a month’s worth of rain in two hours…yes two hours.

“I dodged so many bullets to get there,” says Boyd who was booked on a 2pm flight from Tullamarine Airport.

From early that morning, Boyd began receiving texts from the airline, alerting him to weather changes in Sydney and delays or cancellations in Melbourne. But when the texts didn’t mention his flight, he took a chance and headed to the airport.

“When I got to the airport, Sydney was closed. Then one runway opened and my flight was one of the few allowed to fly,” Boyd recalls. “It was an hour late in leaving but I took off.”

Arriving in Sydney, he dodged a few more. “I got a cab. That was lucky.  I was 45 minutes late, but I was first to Admiralty House.”

According to Boyd, the event was an opportunity to meet with colleagues from around the country. It also enabled him to acknowledge personally the critical importance not-for-profit and philanthropic organisations like the ACRF in the complex, expensive process of making medical advances and taking them from the laboratory to the bedside.

Like Boyd, the nearly 80 guests at the Kirribilli reception applauded Cosgrove’s compassionate introductory comments. “He highlighted the fear the word ‘cancer’ strikes in the heart of anybody,” Boyd says.

“There are steps we can take to avoid it, like exercising and quitting smoking, but nobody knows who will get it or when. Ultimately cancer’s a bad luck syndrome.”

Reducing the fear and improving the outcomes of the bad luck is just what ACRF Chief Executive Ian Brown hopes will result from the evening. He announced $16.4 million in four technology grants for cancer research nationwide[2].

“The announcements highlight how fantastic the ACRF is and the generous people who support it,” Boyd claims. “Philanthropy has a key role [in research and development].”

And so does networking. Over smart cocktails, Boyd spoke with Tim Hughes, Director of Royal Adelaide Hospital’s Haematology Division. “That’s one of Australia’s biggest clinics for acute leukemia. Patients could be potentially included in clinical trials,” notes Boyd. “He was keen to collaborate”.

Boyd also chatted with Michael Parker, Director of Bio21 Molecular Science and Technology Institute. The institute received $2 million in ACRF funding to host the ACRF Facility for Innovative Drug Discovery. It aims to develop technology for cancers for which there is no approved therapy and for those requiring improved treatments.

“We opened up potential collaboration with Cartherics,” Boyd says of the conversation with Parker. “In the future, Bio21’s target antigen discovery program could be relevant to Cartherics’ CAR-T cell program.”

The event also provided an opportunity for Boyd to have a long discussion with Ian Brown about the types of ACRF funding which may be relevant to Cartherics. “He’s also an important connection for the Snowdome Foundation,” adds Boyd who chairs Snowdome’s grants committee.

And then — in less than an hour — the event wrapped-up. “By half past seven everyone was out front calling Ubers,” said Boyd. “I won’t take them, so I walked towards the ferry to take me from Kirribilli to Circular Quay. Rain started bucketing down”.

But then Boyd got lucky again. He’d given his business card to the taxi driver who drove him from the airport to Admiralty House in Kirribilli.

“He rang. I walked back to Admiralty House and he picked me up. I got to the airport and got home at midnight. Tullamarine freeway closed,” sighed Boyd.

Was it worth the effort?

“It was exhausting and good,” answers Boyd from the comfort of Cartherics HQ.